Please have our backs

Vote Smart's mission is to provide free, factual, unbiased information on candidates and elected officials to ALL Americans.

Help Us Out
Media Reviews

So different in background, so opposed in interest, you would not find our kind elsewhere on the earth or anywhere in human history. As a nation we have succeeded, not because we struggle with one another, but because we somehow have learned to recognize that the single issue that will always call us to arms is one that requires the defense of each other - a defense against the aggression that strikes at the heart of the American experience and endangers our freedom and ability to self-govern.

Here at Vote Smart, Americans young and old volunteer their time, take no money from special interest groups, and have committed themselves to an extraordinary effort that, if successful, will provide their fellow citizens with the tools for a reemergence of political power not known for half a century. Their idea is one you may have thought of yourself. It is a deceptively simple concept but enormously difficult to achieve and would not be possible without the collaboration of citizens willing to lay their partisan differences aside for this one crucial task.

Picture this: thousands of citizens (conservative and liberal alike) working together, spending endless hours researching the backgrounds and records of thousands of political candidates and elected officials to discover their voting records, campaign contributions, public statements, biographical data (including their work history) and evaluations of them generated by over 1,500 special interest groups. Every election these volunteers test each candidate's willingness to provide citizens with their positions on the issues they will most likely face if elected through the Political Courage Test.

Vote Smart is a historic undertaking. Citizens come together, not in selfish interest or to support one candidate over another, but to defend democracy. It is an extraordinary gathering of people committed to one purpose: to strengthen the most essential component of democracy -- access to information -- even as it suffers grave attacks from candidates and political parties, many who are now willing to manipulate information and deceive voters.

In essence, what Vote Smart's interns and volunteers have done is ensure that tolerance will no longer be the only option available to the millions of us who are tormented by the issueless rhetoric and often misleading attacks that define contemporary American politics. 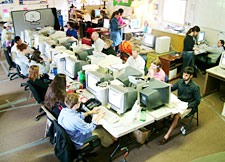 Most of us at Vote Smart are not paid and those who are receive only minimal salaries to cover living expenses. We will not accept funding from corporations, PACs or any organization that support or oppose candidates or issues. This effort will be financed by you and other Americans or not at all. Although we could sure use your help, YOU DO NOT NEED TO HELP US IN ANY WAY. Our programs and services are free to all Americans.

All of us realize that the mudslinging tactics once associated only with the crudest kinds of local politics now characterize virtually all campaigns and have stripped us of the most crucial component in our struggle to self-govern: access to abundant, accurate and relevant information about those who govern us and those who wish to replace those who do.

Help Us If You Can

Vote Smart refuses financial assistance from all organizations and special interest groups that lobby or support or oppose any candidate or issue.

Vote Smart operates much like the Peace Corps -- of the over 10,000 people who have come to help by working at Vote Smart, ninety percent received no pay and those who did received only minimal salaries to cover basic living expenses.

Unlike other organizations, Vote Smart strictly protects its members and supporters. We never sell or provide names, addresses, or other contact information of any supporter or contributor to anyone, at any time, for any reason.

Give Us A Hand

Every candidate and elected official from President to local government can be easily and instantly accessed through the Voter's Self-Defense System:

Vote Smart digests key legislation in Congress and all 50 states into easy-to-understand summaries, making it easy to compare what your representatives said during the campaign with how they actually voted on the record.

From their previous professions, education, family life, and organizational memberships to their social media accounts and latest email addresses.

We test thousands of candidates for President, Congress, Governor and State Legislature with our Political Courage Test. The Test accurately measures candidates' willingness to provide voters with their positions on the issues they will most likely face if elected.

Vote Smart is constantly collecting speeches and public comments made by the president, governors, and congressional representatives. Just type in a word, say; 'immigration' and all public utterances containing the word 'immigration' will appear. Compare what they said while campaigning in California a few years ago to what they are saying now in New Hampshire.

How much money did your representatives raise and from whom?

Want More? How About:

Free to all citizens -- order your Voter’s Self-Defense Manual, a 100-page report on your congressional delegation. A video, which describes what Vote Smart does, how we do it, and how you can use it, is also available.

For every state, find out policies and procedures, locate voter registration forms, where to send them, where you can register in person, and where your polling place is.

Descriptions of ballot measures for every state, including complete text, sponsors, and election results.


Give Us A Hand

Members are able to earmark their contributions to specific Vote Smart programs they wish their money to be spent on. The staff is prohibited from spending their money on programs they have not earmarked their funds for.

Once each year the staff is able to suggest changes, additions and/or deletions to the basic Vote Smart programs. Those suggested changes are then reviewed by the board who can make only tentative decisions. Those tentative decisions are then given to all board members not in attendance. The entire board then has six weeks to voice any concerns or objections. After six weeks, if there are no concerns, or all those stated have been remedied, the changes are adopted.

Founding Board And Executive Board